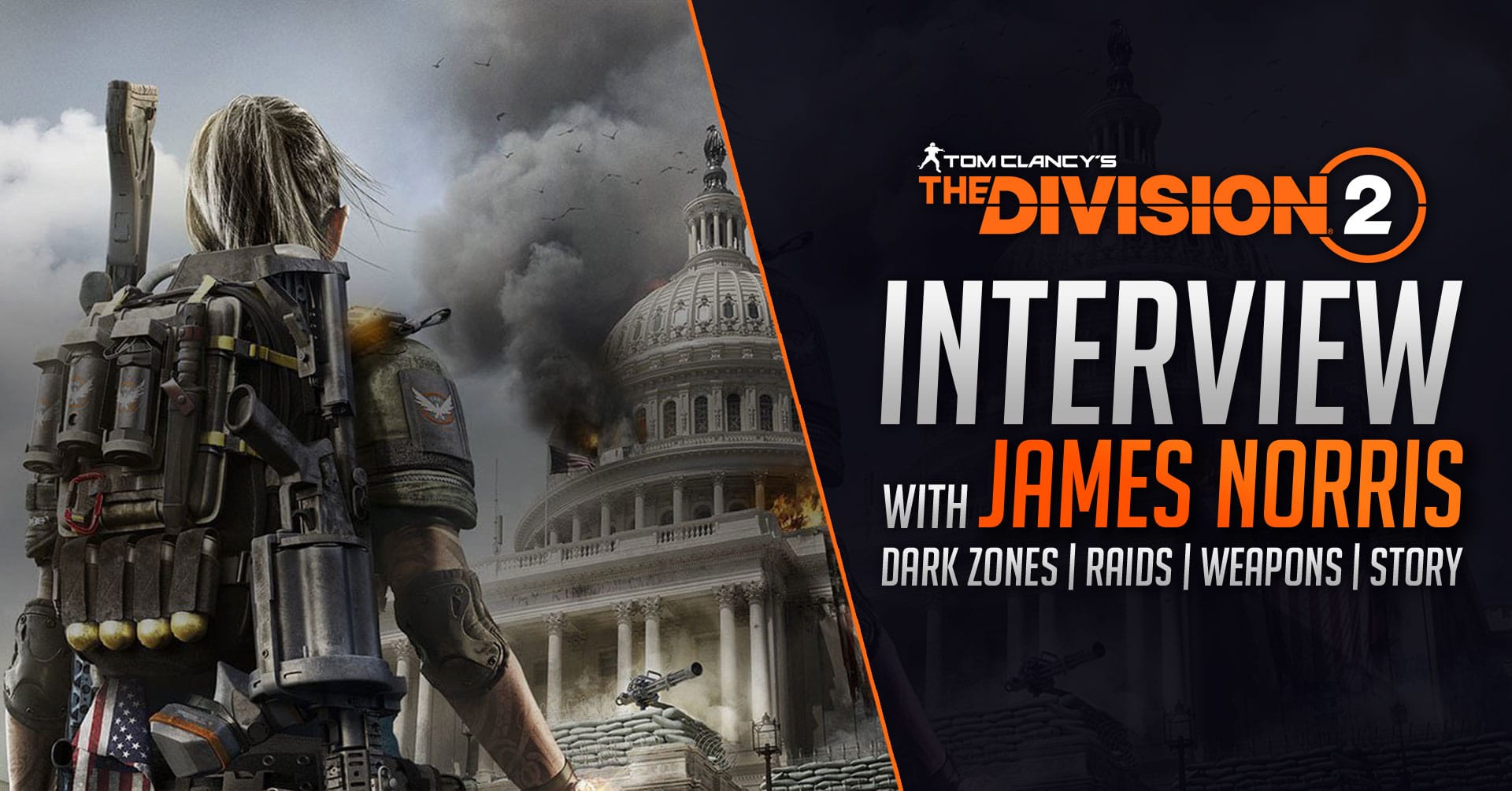 Taipei Game Show 2019 has come and gone, and luckily for us, we had the opportunity to catch Senior Game Designer of The Division 2, James Norris, for a rare interview ahead of launch. We found out about all kinds of new features and content coming to the game such as major changes and differences between the first game and the second game, 8-player raids, updates to Dark Zones, a new weapon mod system, new specializations, and more. You can watch the full interview below:

Buy The Division 2 here and get in on the action!

Differences Between the First and Second Game

Mike: What can you tell us about any major differences or changes between the first and second game?

So we’ve taken all the knowledge and and learnings from creating The Division 1 and applied that to The Division 2. We had a very end game focused mentality. There’s a lot of stuff available for players right on day one to get stuck into. You won’t get to end game unless you’re an absolute maniac but once you do, we’ve added 8 player raids.

There’s all sorts of organized PvP for you to do with the Conflict, we’ve got Team Deathmatch, Domination Modes, the Dark Zone is still alive as well as brand new mods, skills, weapons, gear, and all sorts of stuff.

I know you haven’t played the demo yet but when you do you’ll be able to take a look at these new specializations which players unlock at level 30. They’ve got their own progression tree, new skills, and new mods as well for players to get stuck into. So I think in terms of overall build diversity, The Division 2 is going to offer a lot of player choice. 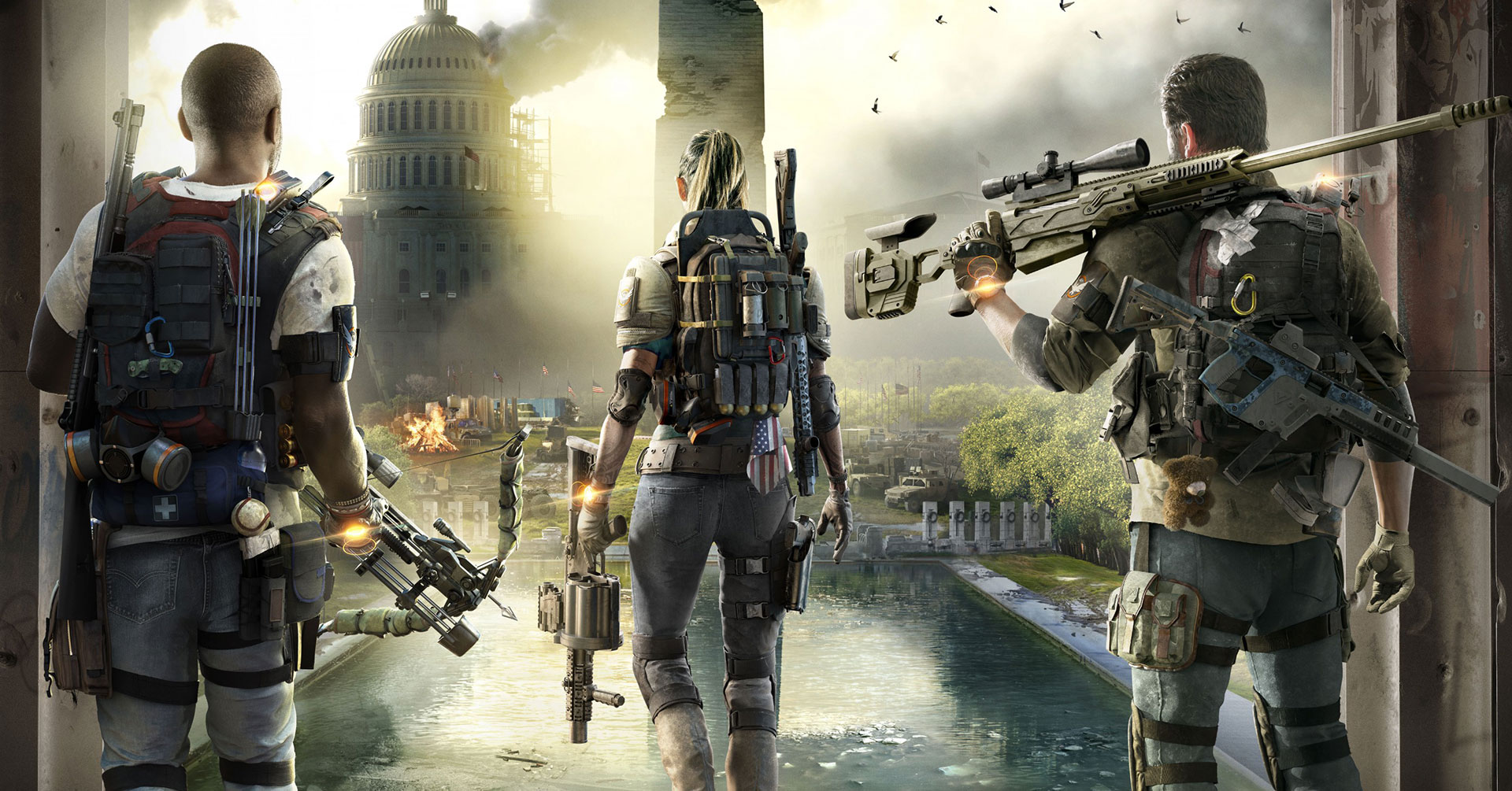 Mike: Starting off with game modes, I want to know if there are gonna be any new game modes and how are the raids gonna work?

James: Well, the raid obviously is the new game mode. I can’t go much more into detail right now but it’s gonna provide players with the biggest challenge they’ve ever faced. Instead of grouping up with three other people, it’s gonna be eight total people.

It’s gonna take even more coordination, you’re gonna really have to work together. I would suggest using voice chat and for some players that maybe generally play solo or only have a couple friends in the mission, we’ve got a clans feature as well which is another new feature where we’ll make it easier for new players or hardcore players that have been playing for a long time to group up and find like-minded individuals to go tackle all the new content that’s available.

So another little twist, kind of a new feature is we’ve got three Dark Zones now instead of one and it’s a two-part reason for that. So the Dark Zone is always the area that has been most affected by the situation of first degree poison and now seven months later in Washington, DC. So we wanted to have three different feelings to these Dark Zones so that players can choose the one that makes the most sense for them.

We wanted to create more player density in these Dark Zones, because before in the Dark Zone, you can walk around for a while without running into somebody. So now, they’re a little bit smaller, there are three of them, there’s a 12 player max in them so the likelihood of you getting involved in some exciting PvP in these Dark Zones is even greater than it was in The Division 1.

But, I don’t want you to be too scared about that. If the Dark Zone isn’t your thing, we’ve normalized gear now as well so we’re gonna make it more skill based battles. It’s not just “I’ve got the best assault rifle so I have this innate advantage over you”. If we have the same gun, both of the stats of that gun are gonna be the same so it’s gonna be more about who’s a better player rather than who’s got the better gear. But, the Occupied Dark Zone is gonna rotate once a week so that’s gonna be akin to the older Dark Zone where the better the gear you have, they’ll still have the same stats in the Occupied Dark Zone, so a bit more hardcore.

Mike: Speaking of weapons, I want to know if there are gonna be any new weapons and what can you tell us about changes to the weapon mod system?

James: When you unlock weapon mods now, it has a fixed set of stats and you can use that mod on any number of different weapons so it’s not gonna be about finding all sorts of mods and min-maxing the stats and everything like that. Once you have a specific mod, you’ve got that mod that you can try out on all the different weapons in The Division 2.

As far as new weapons go, we’ve got the specialization classes so we’ve introduced a 50 caliber anti-material rifle, we’ve got the grenade launcher – really good for clearing out trash mobs and disrupting the enemy’s strategy and then my own personal favorite is the crossbow, the survivalist. So that’s a one and done – you wait for the right moment, take a look at a boss enemy’s weak point, pop that puppy, and the rest of your team can just start burning them down.

Mike: So out of everything that you’ve done so far, as a Senior Game Designer, what would you say has been the most fun part of the development process for you, personally?

James: I really enjoy working with the community. We have a program within The Division called the Elite Task Force which is where we select big fans, people in the community that play The Division and we invite them in to talk about upcoming features and the current state of The Division. That’s really important to me and one of the things that I really love is getting to meet the players. They’re the reason that we make these games and through their feedback and all the content that they create, it helps us to make The Division better.

Because I watch all those videos and I’m a little bit starstruck of them being able to make videos of the games that they love so anytime I get to meet someone who’s a big fan and talk with them about the game, that’s the most important thing to me – that’s my favorite part of the job.

Mike: I know that you said you couldn’t tell us much but is there anything that hasn’t been released to the public yet that you can divulge to us today?

James: I will tell you this…no, I cannot. No no, I think I don’t know of any specific things that the public doesn’t know that I’d be able to talk about today. We’ve got the beta coming up very very soon – there’s gonna be a lot more revealed in that that nobody has seen before so I’d rather just wait until everybody can discovery on their own. It’ll be much more exciting for you to see it unfold in the game than for a guy like me to explain it to you. 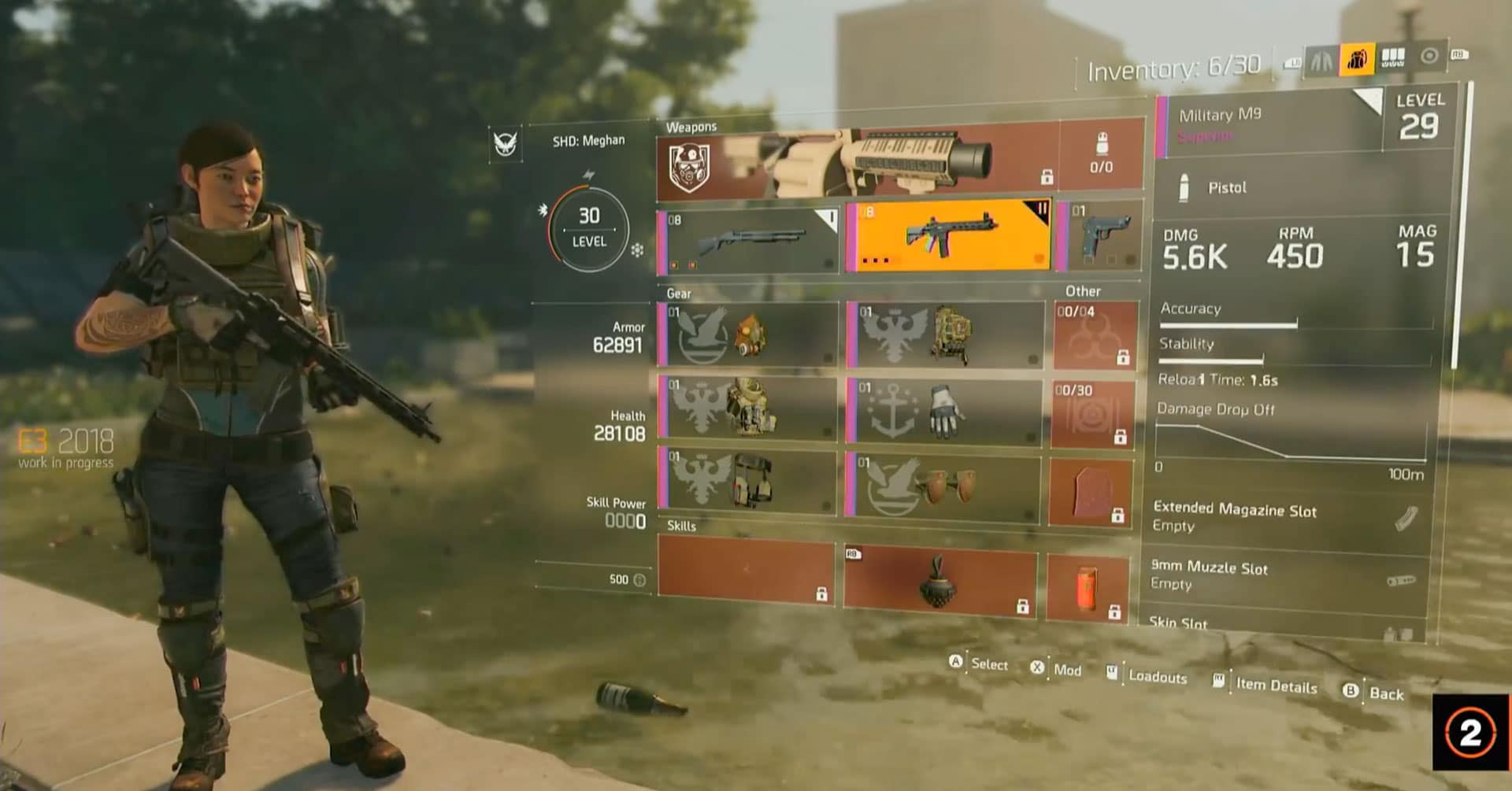 Mike: If there’s anything more about the game you’d like to tell us about, the floor’s yours.

James: The Division 1, as you know, takes place seven months after the green poison is released in New York City, spread all over the United States and eventually the world. And you’ve been called in, responding to a distress beacon from Washington, DC to show up. You’re a new agent and you’ve got to fight your way into the White House to basically take it back – the White House is being attacked and together with other division agents and the local surviving members of the population of DC, you need to rebuild society and prevent an all-out civil war.

It’s summertime, it’s hot, you can wear shorts, no one’s mowed the lawn in a really, really long time so it’s a new environment for us to tell a different story. We took some trips, I didn’t personally get to go, but a bunch of the people from Massive, Reflections, and Redstorm went out to Washington, DC, took a lot of reference images, and we used satellite imagery and geolocation data to make the map so it’s as close to a one-to-one ratio as we could get from Washington, DC. So it’s got a lot of the monuments, residential areas, commercial areas, lots of different types of play spaces for different types of combat than we’ve ever had before that also helped to create the world that we’re trying to bring to you in The Division 2.

Overall, we’re incredibly excited to start playing The Division 2 and everything just sounds absolutely amazing. We’d like to thank James Norris for taking the time to do this interview with us. We’ll be doing an unboxing video of The Division 2 Phoenix Collector’s Edition so stay tuned for that! 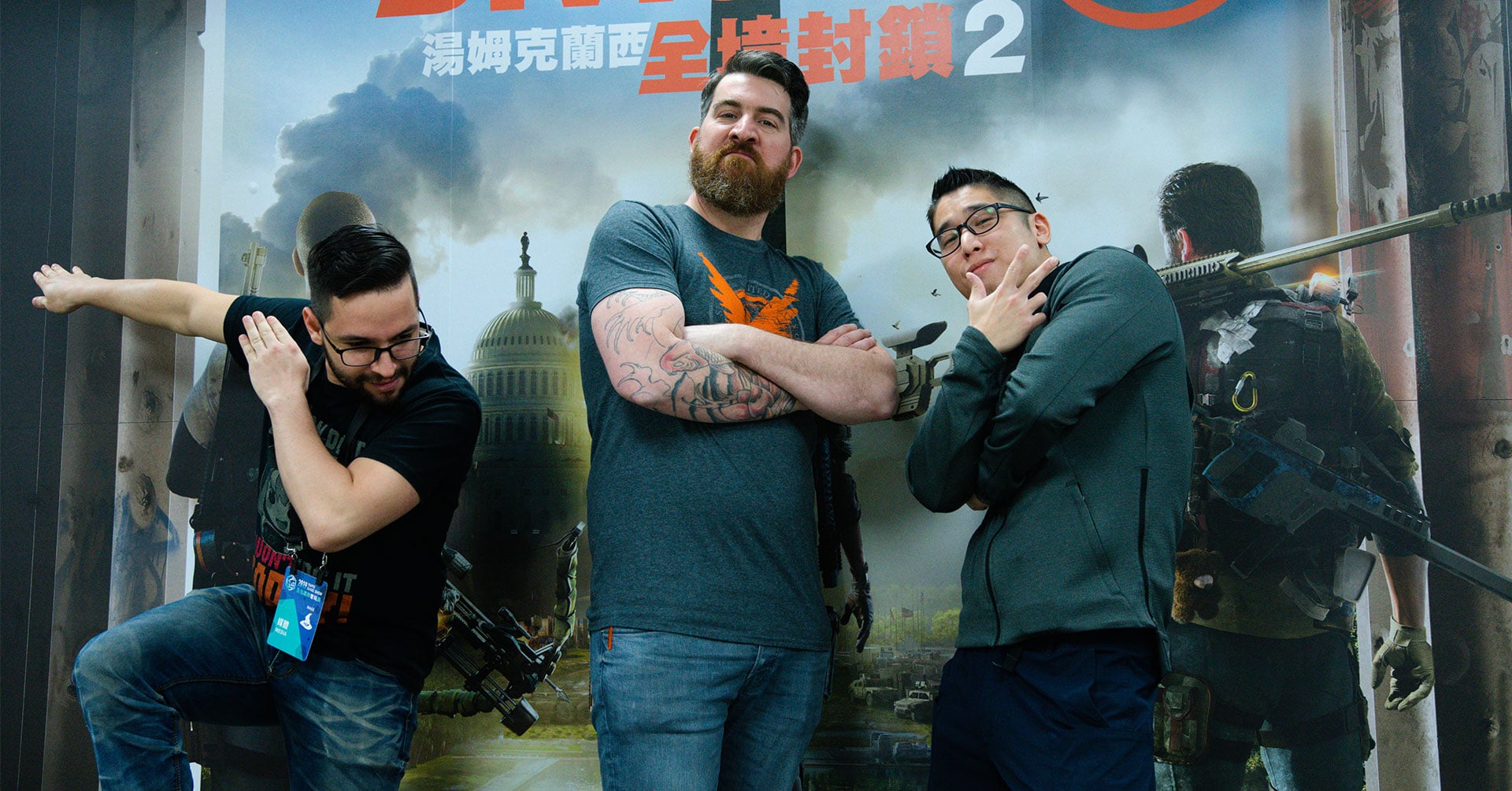 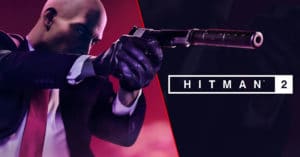 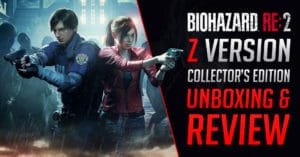 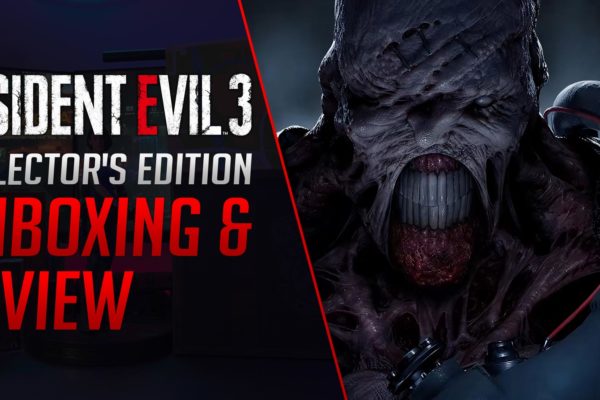