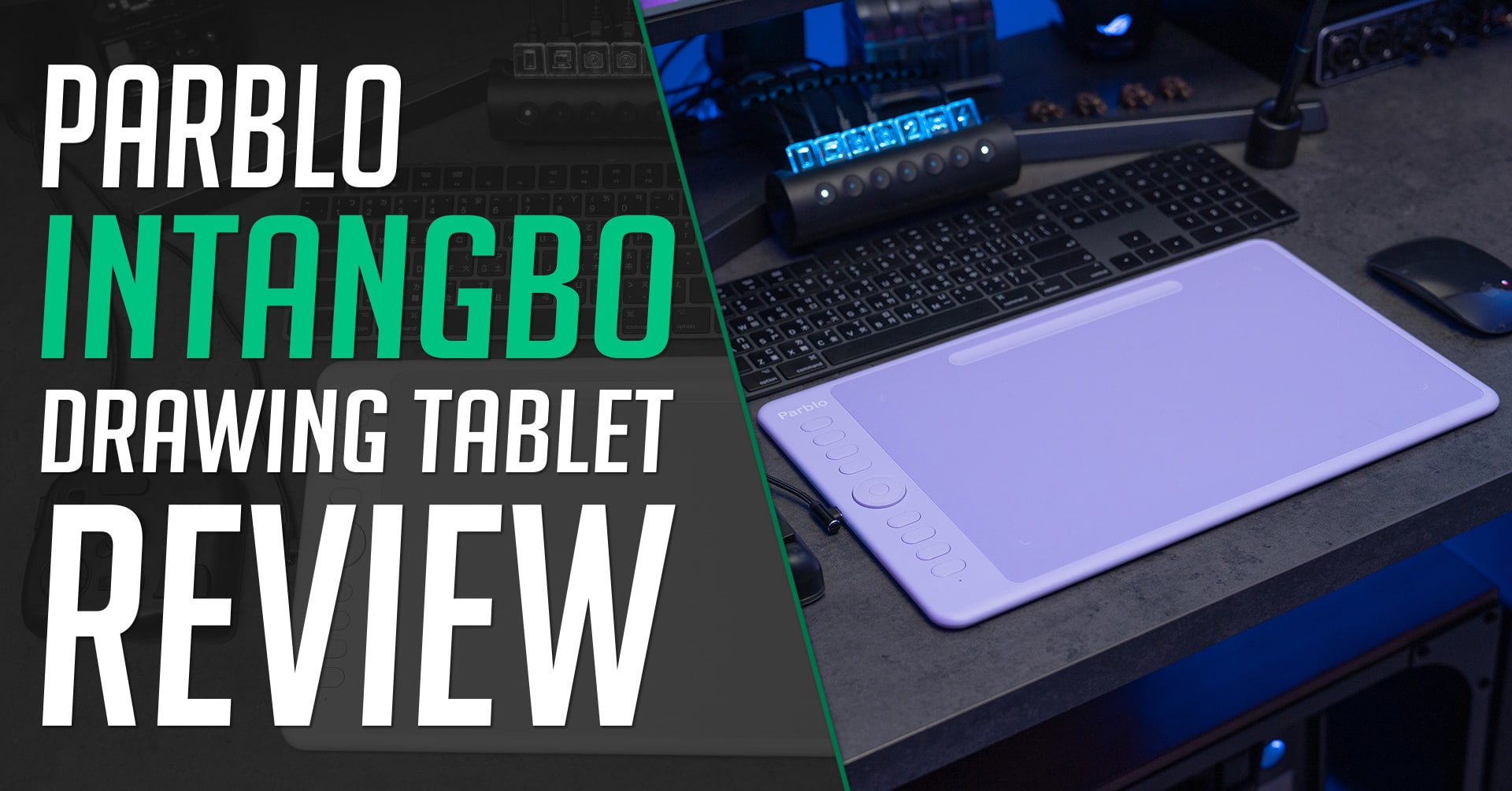 Today I’ll be doing a review of another tool that I use for Digital Art, the Intangbo Drawing Tablet from Parblo.

First, I have never seen any pen tablet that comes with as many accessories as this one. Inside the box, you are getting: 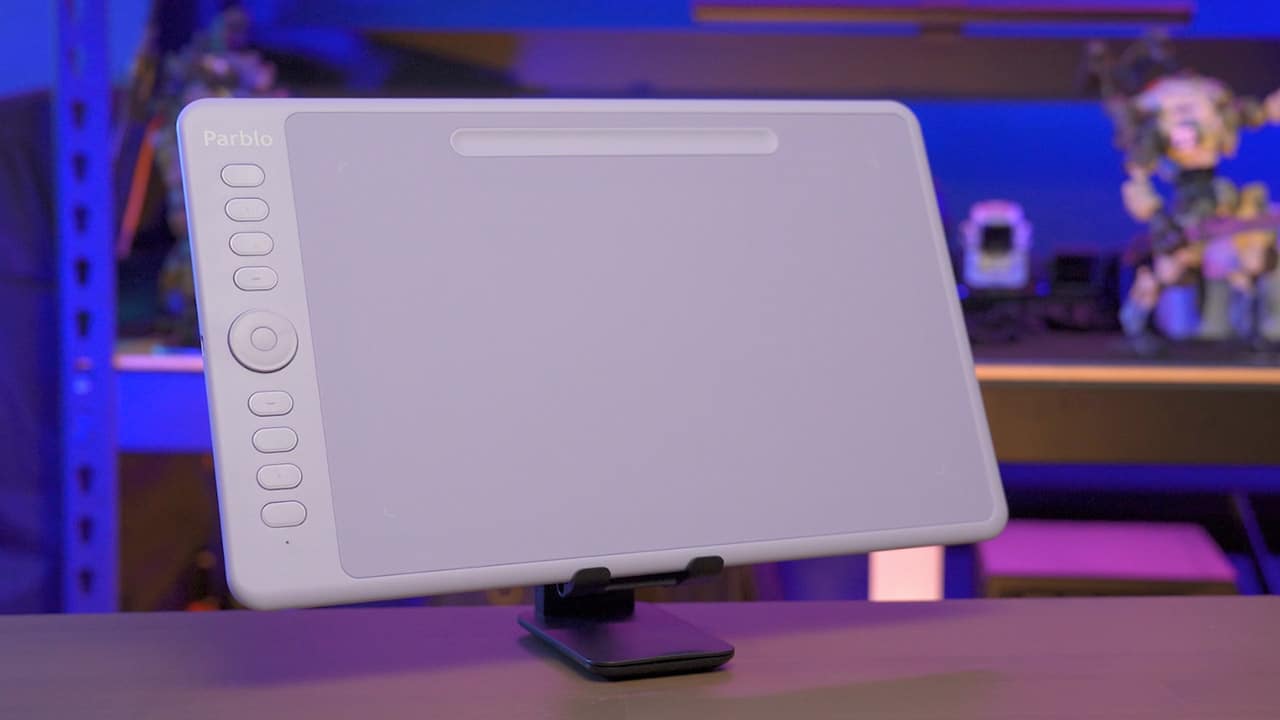 So as you can see, Parblo put a lot of effort into providing all the accessories you need but could that mean that they’re possibly just trying to compensate for the Pentablet performance? Let’s find out.

This pen tablet is built with a full plastic frame that doesn’t feel cheap thanks to the high-quality plastic material and the texture that it has on the bottom, along with 6 rubber feet.

On top of the tablet, there is a groove to place the Pen, and on the left side, 8 customizable buttons plus a dial Ring. The left side is also where you connect the pen tablet to your computer with the USB type-C provided.

You can find this tablet in small and medium sizes, the one that we got in the studio is the medium size, and it has a 10″ x 6″ work area. It is way bigger than the Wacom tablet that I was using before, so it is a big upgrade. 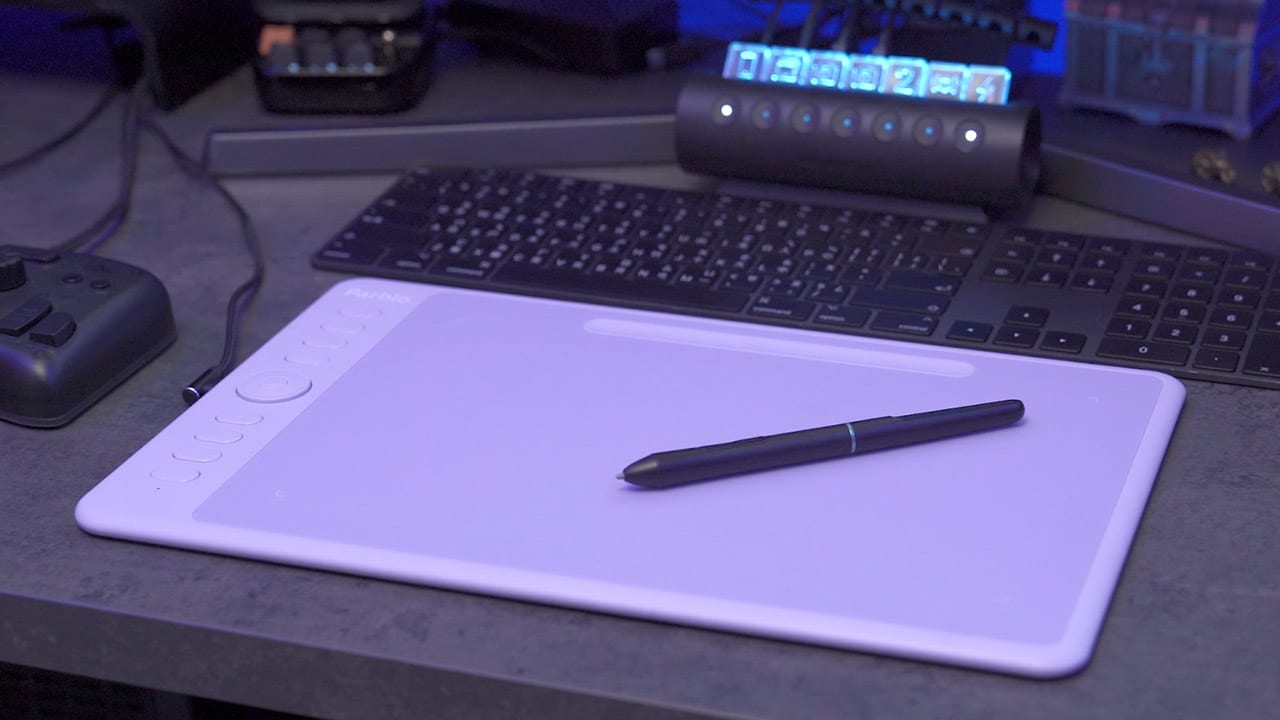 The Pen has 2 customizable buttons, a tilt angle up to ±60 degrees, 8192-level pressure sensitivity, and 8-10mm reading heights.

Now physically, it is a bit too small for my personal taste. It doesn’t have a rubber texture, and the buttons are not elevated like they are on the Wacom pens. I think that made it hard for me to get used to in the beginning.

And yes, I tried to use the Wacom pen, and it doesn’t work on the Parblo pen tablet. Regardless I’m very surprised at how responsive this Pen is, especially when you are drawing; the pressure sensibility is on point. 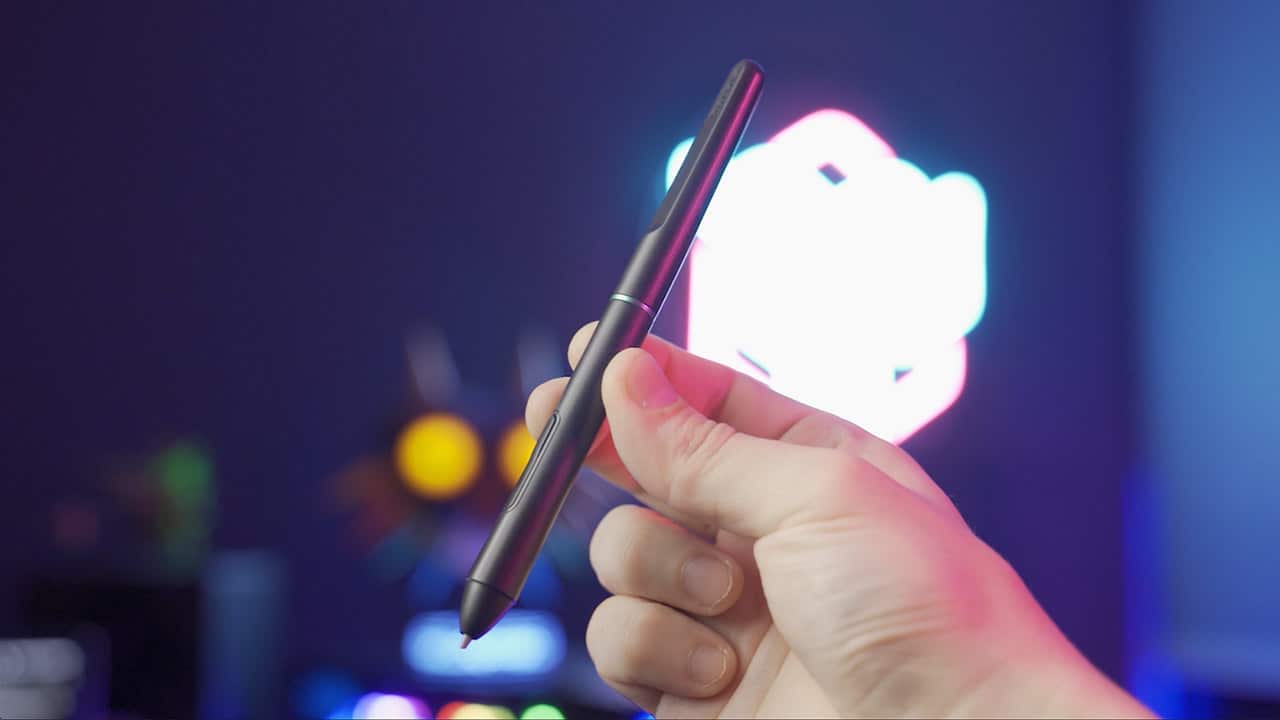 I’m not going to get into the USB adapters, but they are basically to connect the pen tablet to your phone or tablet if you have a design app on it. 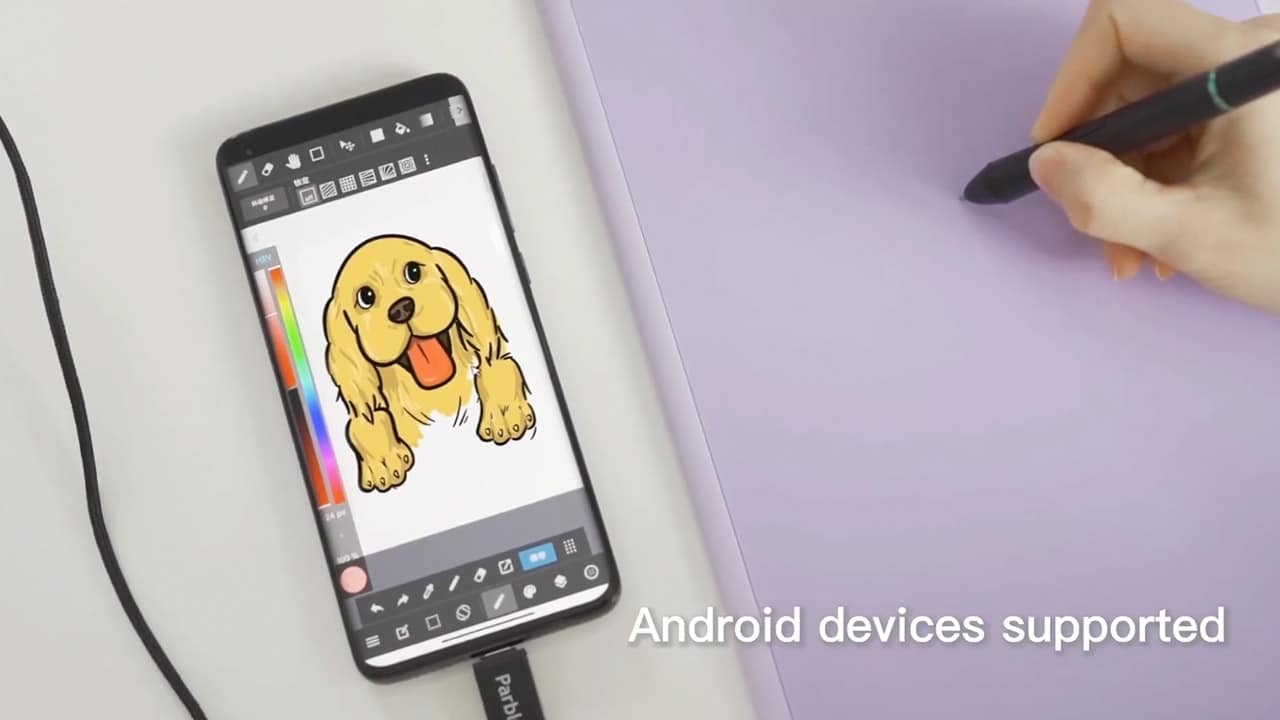 The software is very simple to set up and is compatible with Windows, MAC, Linux, Chrome, and Android devices.

Here you can select the screen area where you want the pen tablet to be used, and on the Pen, you can adjust the pressure settings and the function buttons.

You can also customize all the buttons on the pen tablet and pen to add shortcuts, open the apps and even create macros.

The software also allows you to update the firmware of the pen tablet, and lastly, you can save your personal profile and export it, so no matter where you are, you can bring your settings with you and just import them into a new system. 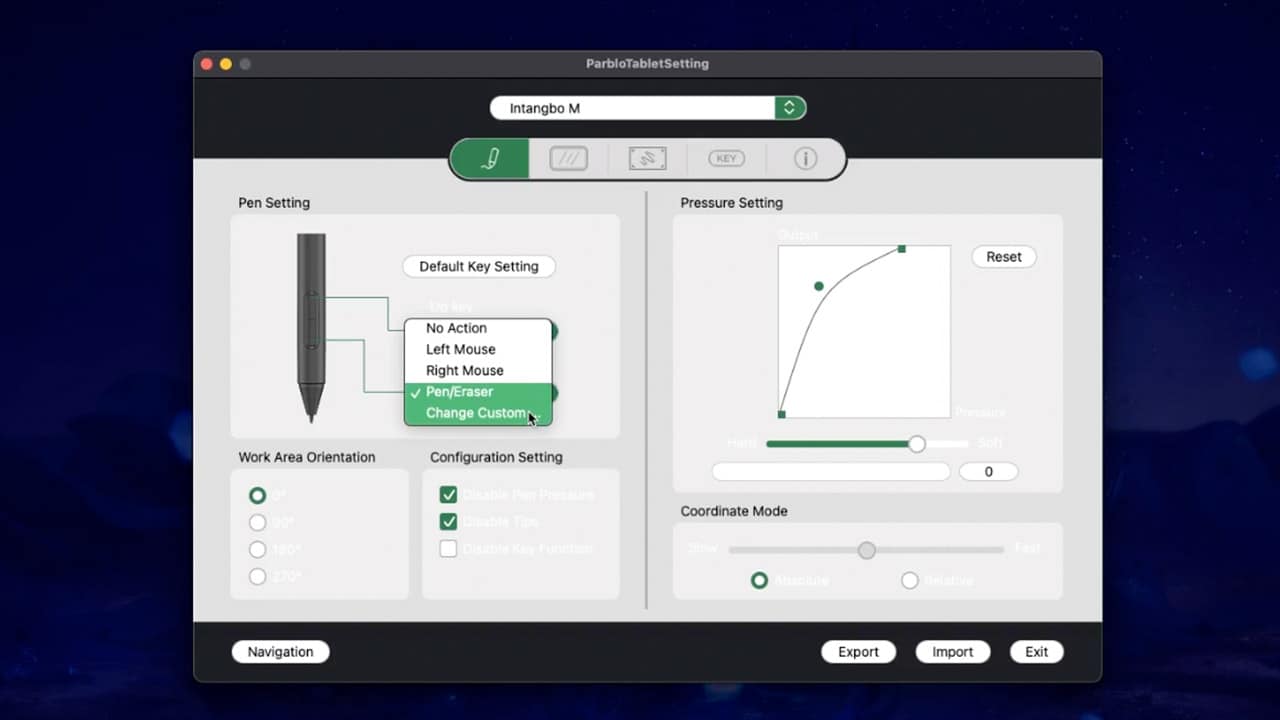 I put this tablet to the test with my most recent digital art, which was a bit risky because it is a brand new pen tablet, and this was my first collab with Magic The Gathering Taiwan

And like I said at the beginning of the video, it was kind of hard to get used to the Pen because of its size and flat buttons.

Another thing that i would have liked is to have a rubber surface on the pen like the one on the Wacom, this would give better stability while using it.

Anyways after a few days of using the Parblo pen tablet, I was set and working smoothly, especially because of the work area, which was a big upgrade for me.

One of the things that I really like is that in terms of functionality, I didn’t have any issue with the software.

In fact, it is very straightforward to use, and most importantly, especially for me as a Mac user, it doesn’t crash at all, which is one thing that I hate from my Wacom pen tablet. I need to purchase third party software to make it work cause the support and drivers of Wacom just suck and never really work.

Overall, if you are searching for a pen tablet that is on price and reliable and won’t let you down, I recommend the Intangbo Drawing Tablet from Parblo. 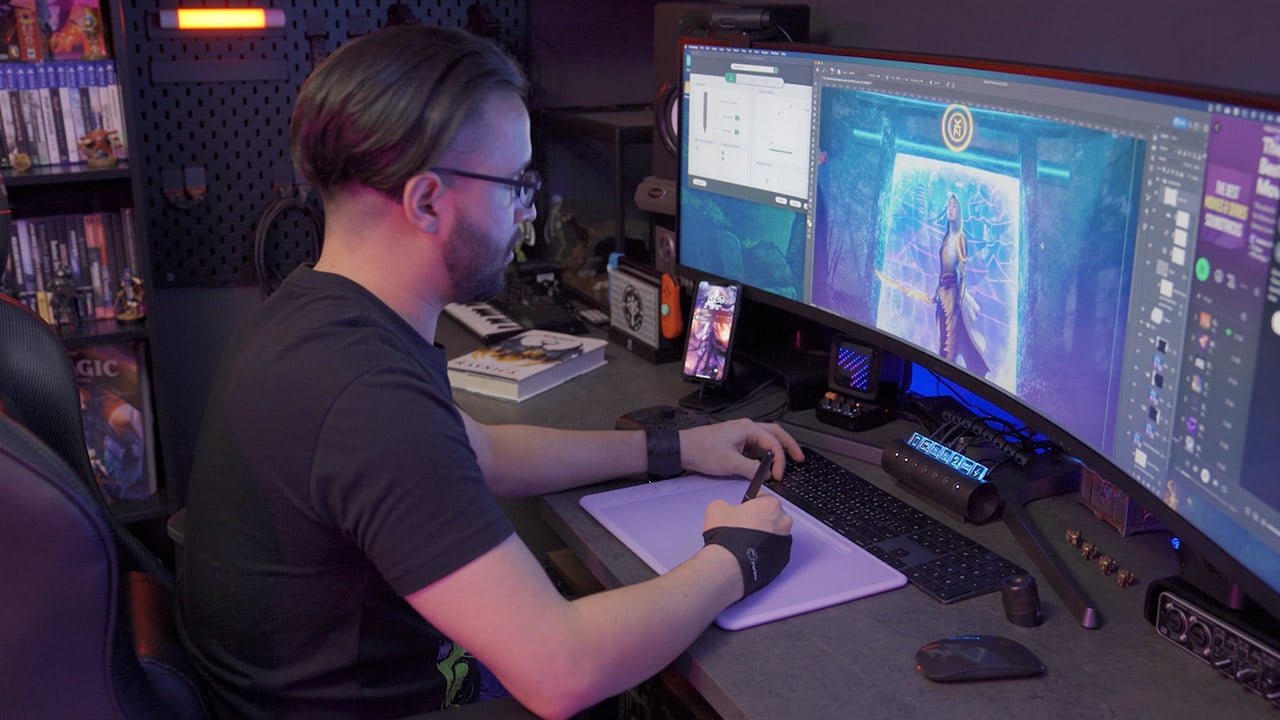 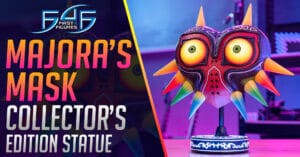 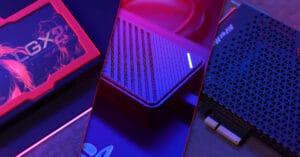 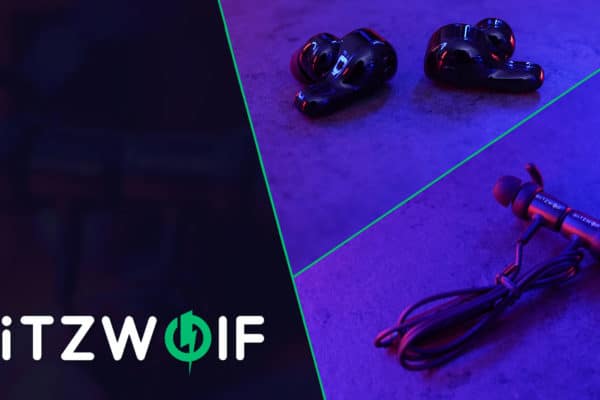 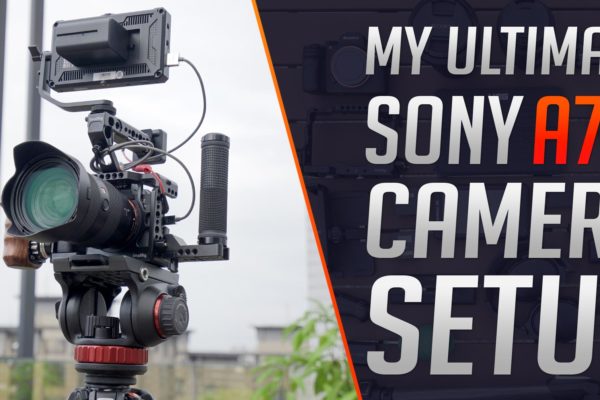 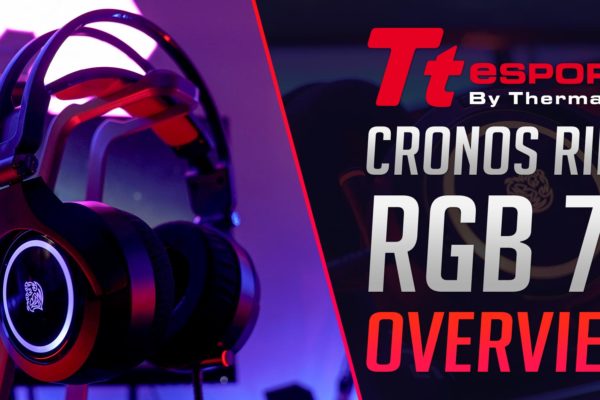